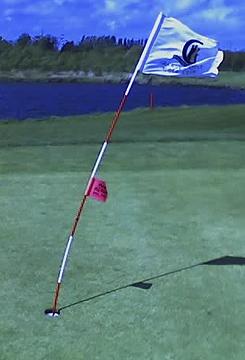 Dr. L.J. Riccio, PhD did an analysis of "average golfers."

Although much is known about the statistical profile of professional golfers, little has been published on the play of other golfers. Riccio's 1990 paper used data from over 100 golfers ranging in ability from Jack Nicklaus to a 35 handicapper.

The analysis was designed to determine which aspects of play separates the average players from the top amateurs. I've also done an analysis of PGA Tour Tournament results from 2007. Scroll down to view. He found that some specific statistics were good predictors of score.

Below is a table which summarizes some of the statistics that Riccio investigated. Where do you fit in with your game?

Let's say your scoring average is 89. You have a goal to get down to breaking 80, thus a scoring average of 79. Compared to overall average golfer statistics, you need to improve by:

Your ball striking and thus swing would need to improve immensely to reach your goal. Imagine how much less improvement is necessary with the short game to realize lower scores. I recommend you buying Dave Pelz's book to help out.

I've also done my own statistical study on amateur golfer statistics. Using a similar range of handicaps as Riccio, I've analyzed scores from my own golf club's tournaments. Click on this link, Fair Handicap Analysis.

From www.usga.org , they have a listing of Men's Handicap Indexes and percentages in each category. Even though this would not include all golfers, it's a pretty good representative sample. 70% of men have indices between 7 and 23, corresponding to scores of about 77 to 93, with an average of 85 (assuming a course rating of about 70).

I'm a subscriber to TourCast that's sponsored by the PGA Tour. I use it to collect statistics of Tour players. I'm most interested in overall tournament statistics. I recently looked at the Nissan Open (Riviera in LA) and AT&T Pebble Beach tournaments. I focused on Par 4 holes. I found that scoring average hole is signficantly lower when players hit their second shots from the fairway. Below is a graph of Score versus Overall GIR.

And, amateurs are less able to hit decent shots from the rough so there would be an even great differences For amateurs, especially, it's much more important to hit the fairway than to hit it long.

Try a little experiment. For five rounds or so, instead of hitting a Driver off the tee, hit a fairway wood or hybrid and keep track of how many fairways you hit and how many greens you hit. With the greater loft, you'll hit fewer errant shots and find more fairways.

The goal of the game is to shoot the lowest score, isn't it???